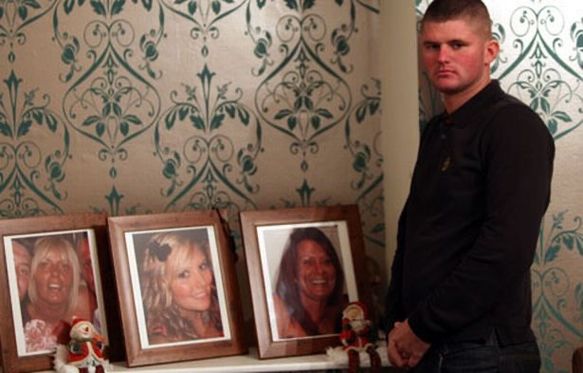 My name is Robert Turnbull. Everybody knows me as Bobby.

In the early hours of New Year’s Day 2012, my life changed forever when my Mum Alison, sister Tanya and aunt Susan were murdered. They were shot dead by Susan’s partner who then turned the gun on himself.

As you might expect, such a terrible incident hit the national headlines so consequently our hometown of Horden in County Durham, and our family became the focus of intense media attention.

Words can never begin to describe the impact that an event like this can have on a person. I’d never really considered what psychological trauma was before this happened. Like most people, I’d been fortunate enough to never need to, but the events of the first of January 2012 were to change that forever.

I learned of the murders within minutes of police arriving at the scene. A friend telephoned me and told me that my Mum had been shot. I was only a short distance away and went straight to the house, but I couldn’t get near. It was all taped off and police told me I couldn’t go in. They said that there was no-one alive in the house. At that stage, I didn’t know that my sister Tanya had also been involved. In a state of panic and extreme distress I began touring the area desperately looking for her. It was later that I discovered that she too had been shot. Needless to say, I was devastated and hysterical.

Some memories of that night seemed clear to me, but others less so. I think I had repressed some of the stuff without even realising it. I now know that’s a common reaction when a person becomes emotionally overwhelmed. It’s as if the brain tries to protect us by failing to process information because it’s too distressing and stops us functioning normally.

In the days and months following the killings, there was a lengthy and thorough police investigation and then a public inquest which again attracted a lot of media attention. I had become very concerned to learn that the man who had committed these crimes had held a number of guns, quite lawfully, despite the fact that he’d come to police attention in the past. He’d been involved in incidents of domestic violence and had a history of mental instability. This struck me as being very wrong and the more I began to dig into things, the more I discovered about the inconsistent manner in which some police forces in England approached their responsibilities in relation to monitoring firearms ownership.

This became a real focus for me, and I threw myself into campaigning for reform of firearms legislation in England and Wales. I guess in a way, this was also a distraction for me. A coping mechanism. It meant that I didn’t have to confront the trauma and the pain that was really inside me.
My campaigning yielded positive results. I featured regularly in local and national media stories and I travelled to London where I met with the Minister for Policing and the Shadow Home Secretary. They listened carefully to my concerns and my local MP raised the matters that I’d highlighted during debates in the House of Commons. The result was that certain amendments were made to the Firearms Act that made it more difficult for people to possess guns and it shone a much needed spotlight on how police forces supervised firearms ownership.

Aside from all this, I did my best to carry on with life as best as I could. I had been offered and accepted counselling/therapy to help me with the psychological impact of my bereavements and the resultant trauma. I saw a counsellor/therapist a number of times and I’m sure they did their absolute best for me, but it just wasn’t having any benefit, so I stopped going. To be honest it felt as if I was wasting their time. Like a typical bloke, I just bottled it all up and told myself that I just had to crack on and get on with things. At the end of the day, I wasn’t soft, and I’d manage.

Fast forward a few years and things had changed for me. My campaigning had diminished. Although I continued the fight to get everything I wanted, I’d already achieved quite a lot and I’d also organised some fundraising activities including a football tournament to raise money to help other families bereaved by murder and manslaughter. I guess on the surface, everything seemed as if I was OK, but inside, things were very wrong indeed.

I wasn’t able to sleep well at all. If I did manage to get a short period of rest, I would wake up in the night with my mind constantly churning over and unable to get proper restful sleep. I’d always enjoyed a drink socially, but I began to realise that my alcohol intake was approaching unhealthy levels and I began to dabble in the use of other substances too. I realise now that this was all in a subconscious bid to block out the pain. To deny the trauma.

I found myself sometimes behaving recklessly, and I was involved in a number of car accidents. Eventually I realised that I had to do something to stop this destructive behaviour. My life was spiralling out of control, but I didn’t know what to do.

I remembered that in the months after the murders, I’d had help and support from a homicide caseworker who worked for a national support charity. Although I’d not seen her for years, I still had her contact details, so in a state of some desperation I got back in touch and told her that basically, I felt as if my life was falling apart. She talked to me about the counselling/therapy that I’d had in the past and I explained that I found it unhelpful in that it didn’t even begin to address the huge trauma I had suffered. She said she’d talk to someone she knew at work and then get back to me.

Before long, I was in touch with Don Hewitt. He talked to me about a psychological intervention that addresses mental trauma. He explained that it had been developed in the USA but had never really gained traction in this country for a variety of reasons. He told me how, if done correctly, it had the capability to completely resolve my trauma and not just mask it or provide me with coping mechanisms. It all sounded a bit implausible if I’m honest, but such was my situation that I would give anything a go.

I arranged to see Don at his base in Yorkshire. Unlike the counselling I’d had before, he told me to set plenty of time aside for my “sessions” because they were likely to be much longer than the standard counselling 60 minutes that I’d been used to. The upside of that was that the technique would take effect rapidly so I wouldn’t need to make repeated trips week after week, month after month. I decided to take a week off work and booked into a small hotel in Yorkshire so that I could do a fairly intensive programme of trauma reduction with Don. Normally that wouldn’t have been necessary, but I lived so far away, and my work situation meant that this approach worked best for me.
Firstly, Don conducted an assessment and then together we identified the things that I wanted to work on. He explained that I would make all the decisions around what issues I wanted to address in sessions and that I would be in full control of the process from beginning to end. Naturally, I was apprehensive, but this helped to put me at ease, especially when I realised that I wasn’t going to be hypnotised or put under the influence of anything that seemed weird or sinister.

The sessions themselves were quite different to anything I’d experienced before. For a start, the first one lasted most of the day with a short break for lunch. It wasn’t a frightening experience, but it was emotionally challenging and there were points where I became quite upset. However, in line with the guidance I’d been given, I kept going, whilst Don repeated a pre-determined set of questions. Over time I began to feel the emotional charge I’d experienced almost melt away each time I went over things. Eventually we reached a point where the deeply distressing details of what happened that night in 2012 no longer had a hold over me. This happened in one single day.

The following day I’d decided that there were some other memories connected with the incident that were still bothering me psychologically, so we did a session on those. We started around 10am I think and by lunchtime we were done. Don asked me how things felt now and although the memories were still unpleasant and difficult (how could they ever not be), they seemed very different now. I didn’t feel that I needed to shy away from them. I could confront them, look at them, consider them and talk about them without becoming emotional. They had lost their power to control me. I decided there and then that I didn’t need to go any further. The matter was resolved in less than two days.
I booked out of the hotel and drove back to Co.Durham with a massive grin on my face all the way home. When I arrived back, family members commented on my mood and asked me what had happened to make such a difference. I said that I didn’t know, but that whatever it was, it had done the trick for me.

That weekend without prior planning, I packed some bags and within days boarded a flight to Australia to exercise my newly restored freedom.
Today, I’m back in the UK. I have a different job and I work in the south of England on a major infrastructure project. I still have my place back home and I travel back there at weekends to socialise with family and friends. Trauma Resolution has been my lifeline. It literally turned my life around. It’s simple, and although challenging, it was unbelievably fast acting in my case. I would certainly recommend it to anyone who is suffering from the impact of psychological trauma which can trap you for years and hold you in a place from which you feel you can’t escape. I’m living proof that you can!

This account has been freely given. I am in no way commercially connected with Bounce Trauma Resolution and I have not received any financial consideration or equivalent. I’d just like others who have suffered like me to have the opportunity to regain their full potential through trauma resolution work.
Bobby Turnbull